Sweetie and I took his granddaughter to dinner last week. She's finished her first year of college and had enough of the America's Oldest City. She's a small town Northern girl, not too enamored of a tourist town, or a college that doesn't allow refrigerators in dorm rooms. In the conversation, Sweetie asked her what she likes to do. She whipped out her phone and showed us a couple of her doodling pictures. I noticed that doodling, like so many other things, has come a long way from the flowers that I draw over and over while put on a telephone hold. 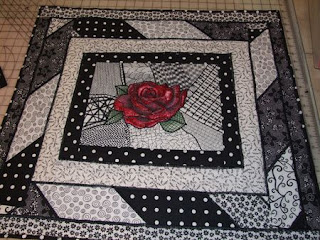 A couple days later I saw this picture on a quilting FB site. Instead of doodles it a way of stitching Zentangle®. It's like a black and quite crazy quilt. I like it.

Today Alana Sheeren pointed FB artists and non-artists (that would be me) to " a practice of doodling to uncover and express what's going on in your  inner world, while having fun and relaxing." Check it out http://drawsome.marabelzer.com

I think I see some doodling in my future. How about you? Doodled lately?
Merry ME
Posted by Merry ME at 5:58 PM