"At  3 p.m., all across the country,
people will be silent
and will acknowledge you and honor you
or simply fall silent and let themselves feel
that your death is our loss.
Today, at 3 p.m. Pacific time, I will be thinking of you
and I will be thinking of those you
faced and fought who have also suffered and died. "
Letter to an Unknown Soldier*

I'm from a military family. I was married to a Naval pilot for 20 years. In all that time I never had to attend the funeral of someone who died on foreign shores.  My father was buried with full military honors and rests eternal in the Jacksonville National Cemetery. I go to visit his grave a couple times a year. It always surprises me to see the number of headstones that have been placed since dad's funeral. 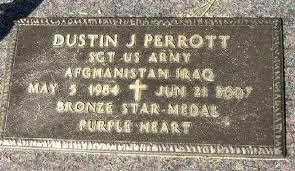 On this Veteran's Day as we celebrate the lives and give thanks for the sacrifice of the men and women in our armed forces,  I'd like to share a story with you about a young man who was killed in Afghanistan 7 years ago.

Dustin "Dusty" J. Perrott was born on May 5,1984. Twenty-three years and 29 days later his life was cut short by an IED in Miri, Afghanistan. Dusty's official obituary reads:

As early as third grade, Perrott was the class clown. In high school and beyond, he channeled that energy into playing drums with his band.

“Dusty had an ear for music like nothing I’ve ever seen,” said his wife, Anna. He couldn’t read sheet music, but he could hear something once, like an Elton John tune, and play it right back without error.

A 2003 high school graduate, he volunteered to go to Iraq, serving there from December 2004 to March 2005. He sought to follow in the footsteps of his father, a sergeant, who died when Perrott was 4.

Dusty's sister, Angie, described him as "one of those guys that just had a presence about him . He could walk in a room, not say a word and you knew there was something about him. He was a kind sweet gentleman but if he saw someone being mistreated, he would handle it in a heartbeat!" Dusty loved the Miami Dolphins and Dan Marino.
____

I never met Dusty, but I feel like I know him. Angie Barr contacted me about making some bears out of Dusty's clothes. I've made bears from t-shirts, scarves, a robe, an old quilt and even the clothes a woman wore when she coded on a gurney in the emergency room. Dusty's were the first to come from a person who died in combat. I have learned that it is not uncommon for the clothes to be somehow imbued with the spirit of the person who wore the clothes. 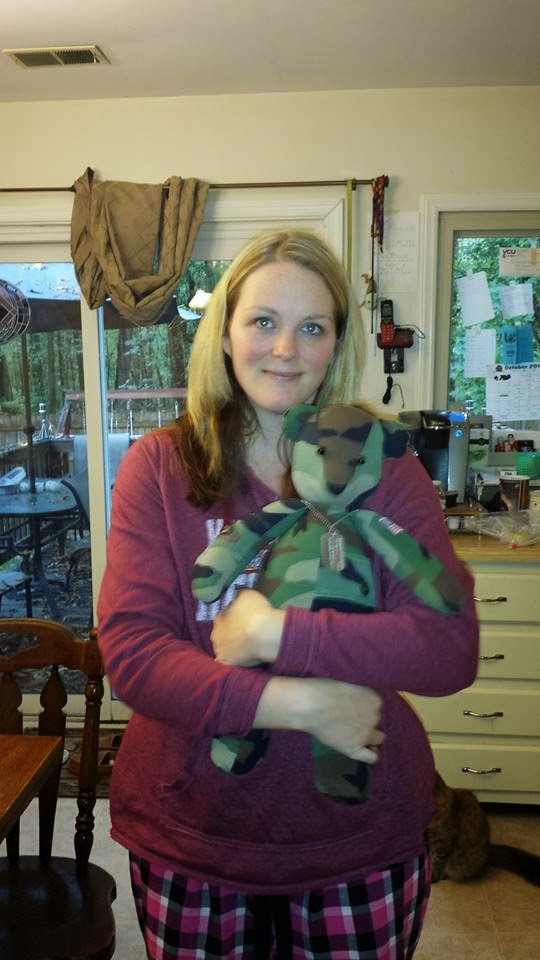 When I opened the box of Dusty's clothes, some camouflage BDU(Battle Dress Uniform) pants, a desert cammy laundry bag, and some Miami dolphin football jerseys, I did what has become a ritual for me. I held them close to my chest. I said a prayer. 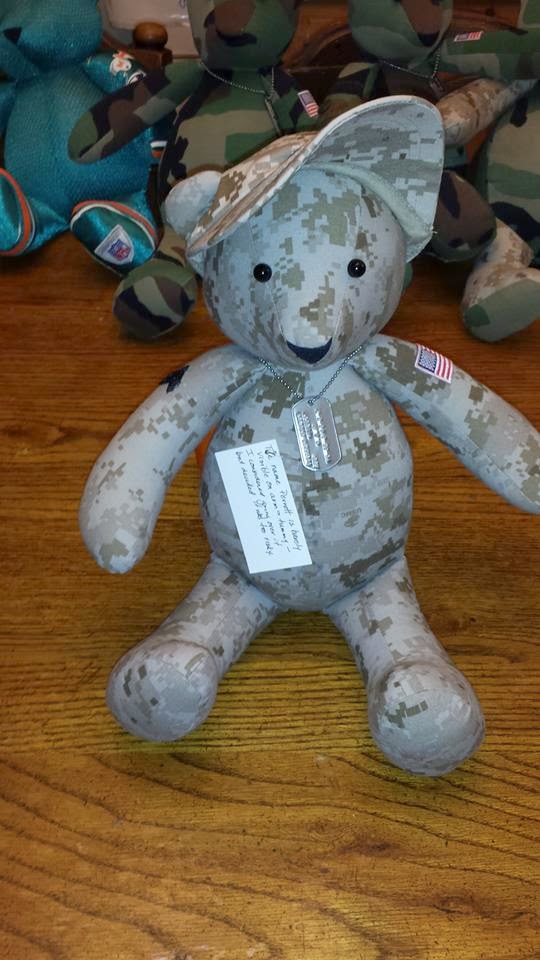 A couple days later I began to cut the pants into pieces. I needed as much material as I could get because I wanted to make 4 bears. It was tricky. There were pockets located all over the pants. As I got down to the bottom on one leg, I put my hand inside the pocket. I didn't expect to find anything inside. I shivered as  I pulled out a handfull of cigarette butts. I held in my hand, perhaps the last thing Dusty ever touched. When I closed my eyes, it was if I could feel the young man's deep breath, the smoke filling his lungs, then slowly encircling his head as he exhaled. Did Dusty smoke those cigarettes in the quiet moments between battles? Was he sharing stories with his buddies or writing his final letter home to those he loved? I didn't know the answers to those questions. But I did know I wouldn't be the one to throw them away.

If those butts  were a link between life and death, it was important to include them in a bear. So I did. I tucked them back inside a pocket with a note for Dusty's sister. She said it reminded her of when they were kids and sneaked cigarettes.

Have you ever watched Long Island Medium? You know how she comes out with some weird something and the person she's talking to knows immediately what she's talking about and it's always a personal connection to the spirit Theresa is in contact with. I know it sounds kind of woo woo but I believe these butts were the same thing. Dusty didn't know he was going to die. When his belongings were packed up nobody knew the BDU's would be made into bears. Yet, when Angie held that bear, there was an immediate connection to her brother who had been gone for 7 years.


At 3 pm this afternoon I ask that you join others in a moment of silence. Say a prayer for those who have died and send a fervent message to the Divine Peacemaker that no more mothers and fathers will have to bury their sons or daughters, that no more wives and husbands will go to bed alone with broken hearts. And no more children will have to ask "why?"

May the day come when we build more playgrounds than graveyards.
Merry ME

For pictures of Dusty's Bears please see my Bears by Me facebook page at  https://www.facebook.com/memorybearsbyME

**Where Have all the Flowers Gone, by Pete Seeger
Posted by Merry ME at 12:26 AM

Mary...you've captured the essence of this very important soul work you are doing divinely.

I felt Dustin's presence even through the words you've spoken here...palpable, wistfully, and even as the soft sigh of air in the room.

Thank You Beloved Sister for your gift...as it truly is a gift, by what you create and the words you so freely share with us.

I know this because of the tears in my eyes and heart.

Blessings of the Highest Good to All Concerned,

I have known Dusty since he and my son, Isaiah, became best friends in Kindergarten. He played at my house and ate meals at my table. He had cute freckles and a goofy grin that always made you wonder what he was up to. Thank you for taking care of him and his family. You have served them all through your words and deeds.

All day today i have been hearing stories of heros, both with us and gone. Mary, your is another story so descriptive I almost feel as though I know a little of Dusty, another hero, lost too soon, but will always be remembered. I know your bears bring some comfort. LD