With regards to my previous post (see below) I'd like to make sure you all know I was in no way  judging people for the way their house looks or the way they do things. I was simply making an observation.

So now that we've got that straight, I'm off on another subject. 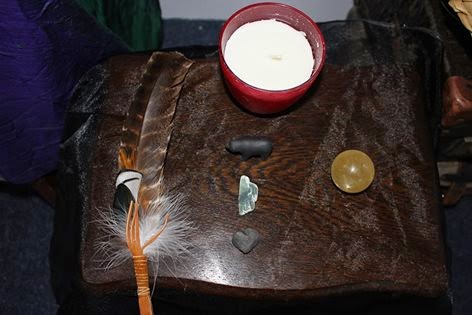 "If you could make an altar to your life what would be on it? How would the grace of you show up? "


Dictionary.com defines an altar as a mound or table where religious rites are performed or sacrifices are made to the gods. It also says an altar is the table used in the celebration of communion (of the Lord's Supper).

I've never thought of making an altar to my life. For most of the day in the back of my mind, I've asked why I would need or deserve an altar. The idea of it sounds like I'm putting myself on the same level as God and that feels uncomfortable. After much pondering I finally came up with is this … if it is true (and I believe it is) that I am made in the image of God, that the light of God is in me, then making an altar of my life would actually be a place to honor the reflection of God in me.  I'm okay with that.  I think God would be okay with that.

As I was typing this, I read the question more carefully. It asks about an altar to my life, not me. I think there is a distinction to be made there. An altar to my life would, in essence be a place to honor the life God has given me. What better place to celebrate communion than at a place set aside for the things that give my life meaning.

How would the grace of me show up? Hmmm, another question that takes some thinking. A synonym of grace is sanctification. One of the definitions of sanctification is to entitle to reverence or respect. So would another way of asking the question be what parts of me do I think are entitled to respect?

On my altar I'd have candle to call in the light. I'd have a heart rock, symbolizing  love; a pen or pencil to symbolize I'm a writer; a baby cup or shoe to symbolize motherhood; a rock or shell to represent the world beyond me; a feather to remind me to soar, and a plant to keep me grounded; a bookmark to hold my place; a bell to call me home; a red bird to symbolize life long partnership; a tulip for beauty; a Coke, a sewing needle, and a stamped envelope; a cross and a prayer. If there was any room left maybe I'd stick on a tube of arthritis cream and a Prozac.

I think tomorrow I'll start collecting these items. I know exactly where I'll set up my altar. I like this idea. How about you? What would be on your altar? How would the grace of you show up?

May you be blessed with the knowing of you,
Merry ME

bowing to the deep wisdom arising in you, to the Grace showing up in the way you have built your altar and your willingness to tend lovingly to the Holy as it lives in you. I wonder if you would mind if I put a link to your answer in my facebook post? I think it will inspire and strengthen those who read it.