"Destiny is no matter of chance.
It is a matter of choice.
It is not a thing to be waited for,
it is a thing to be achieved.
William Jennings Bryan
Today is my Sweetie's birthday. I'm learning that even men who profess to be too old for celebrations, too grown-up for presents, and too worldly for songs sung in their honor love to be treated to all the pomp and circumstance that a birthday brings with it. 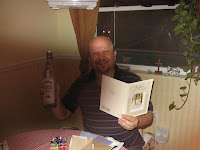 Last night we celebrated with Father/Brother Georges whose birthday was on the 13th. [Photo L: Can a priest have too many bottles of Ouzo?] We split the difference and went out together for the traditional gorging of ourselves. Good food, good company, not so good birthday pie. What's that song, 2 out of three ain't bad? The boys said the pie (which I made, not the restaurant) had just the right amount of tartness, but I translate that into it was way too sour. An hour after I ate a piece my mouth was still puckered. As f 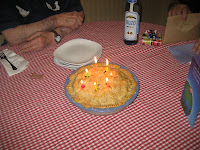 ar as I'm concerned, it was a good thing we were so stuffed on roast beast and not so hungry for dessert.


[Photo: Apple pie looking a lot better than it tasted!] 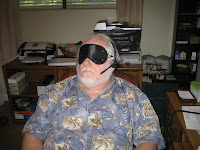 Sweetie asked for two things in particular - a black out sleep mask and a book. The mask is to wear, not when he's sleeping, but when he's talking on the phone with a client. He says it will help him envision the person he's talking to, thus being able to coach with no outside interference. Sweetie is much more focused than I am. Once I put on that mask, I'd be in sleep city for sure. [ Photo R: Sweetie practicing deep concentration. Or is that sleep? Definitely not the best angle! In reality Sweetie is NOT as broad as the desk behind him.] 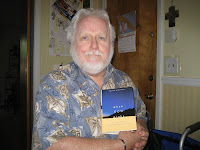 [Photo L: This is also not the best photo of Sweetie - he has a bit of a deer in the headlights look. With his beard and tropical shirt, I think he is channeling Ernest Hemingway. This picture might be similar to those taken of E.H. after a good night's toot.]

When God Blinks, by Squire Rushnell, is a book recommended by another coach. I think it is along the lines that there are no coincidences in our lives. Sweetie is excited about reading it. I'm sure I'll hear more about it as he reads. Stay tuned. I'll share.

Sweetie gets a morning greeting from tut.com. This morning he got a personalized birthday note that I wish I'd written first. It says so well what I believe about birthdays - that it is a day set aside for each of us to stop and take note of our unique place in this universe. All of us are pretty caught up in the busy-ness of living and working and coping. I believe on at least one day a year, we should stop, celebrate ourselves (and let other celebrate us too) and take stock of all that we are and all that we are yet to be. Like Spring cleaning, we can chuck our old fears, resentments, "shouda, woulda, coulda's" so we're better able to move forward, in gratitude and love, to the place we want to be.

"A few years back ... not so long ago, heaven and earth erupted into a major celebration with the news of your impending adventure into this very times and space. You see, someone like you doesn't come along all that often ... in fact, there's never been a single one like you, nor is there ever ANY possibility that another will come again. You're an Angel among us. Someone, whose eyes see what no others will EVER see, whose ears hear what no others will EVER hear, and whose perspective and feelings will NEVER, ever be duplicated. Without YOU, the Universe, and ALL THAT IS, would be sadly less than it is. "
It ends with a P.S. "This is going to be YOUR year!"

Good Golly Miss Molly, that just makes me want to get up and do the happy dance!

When Sweetie was born he weighed just barely over 4 pounds. His father was almost 60 years old and his mother fighting demons that took most of her strength. Sweetie had two older brothers who were mostly grown and out of the house during his childhood. He pretty much raised himself. As a young boy, when he should have been playing ball, he watched as his mother was carted off to mental hospitals with no explanation. He watched as his father struggled with a burden that seemed to heavy to carry. He watched and internalized. There were aunts and uncles and cousins to fill in a few of the gaps, but mostly he was left alone to try to make sense in a world that seemed out of control.

One of his brothers died way too young from TB. Another committed suicide. It's no surprise that my Sweetie has had difficulties forming and maintaining relationships. But it may be a surprise that he's come to a time and place in his life where he's opened his heart to other people. He shares what hasn't worked for him and what might work for others. When he's standing in front of a group of people talking about relationships he is, in my opinion, in his glory. Lately he's been working with middle and high school students - "losers" as they've been labeled. I think Sweetie is very brave to stand up in front of kids who act like they aren't even listening, smart ass kids like he used to be, and say something similar to the birthday blessing above.

Sweetie has a pretty hard exterior, but inside he's all soft and squishy. He loves like there's no tomorrow because he's learned some tomorrows never come. Oh, he's made mistakes along the way. Who hasn't? But he hasn't quit trying to find a better way.

I met this man I call Sweetie at a time in my life when I was ready to start living again. My mom had died, my dad recovered from hip surgery. I had been divorced a long time, I wanted to love and be loved in that special way. I opted for the Internet and was on my way to closing even that door when I got a great note from a guy who left me asking for more. One thing led to another and here we are. Coincidence? I don't think so. I'm guessing it was more like God blinked.

Happy Birthday, Sweetie. I love you to infinity and beyond. May God bless you with abundance, and joy and His perfect peace.
Merry ME
Posted by Merry ME at 4:01 PM

ohhhhhhh!
i just LOVED this.
thank you so much for posting it!
and a big happy birthday hug to mister sweetie!!!

smilin' and celebratin' with you guys!

God winked today.
I was reading A Return to Love by Marianne Williamson with my morning tea and she stated that Angels are the thoughts of God. Angels light the way.
I also read a selection from Rachel Naomi Remen's book, Kitchen Table Wisdom, before leaving for work. Today's selection talked about angels and the help and healing they offer. She said what we don't recognize is that any one of us may be used in the same way - to carry help and healing to others.
Sweetie's greeting from tut.com called him an angel among us.
Once I read your blog I knew someone was trying to say something to me. Three angels in one morning was a wink. I remembered the nuns telling us about our guardian angels in elementary school and I had forgotten mine. If ever I needed an angel it is now, so I stopped at the Hallmark on my way home and now have an angel of hope watching over me from my kitchen window.
Thank you.
cp