A New Dog in Town 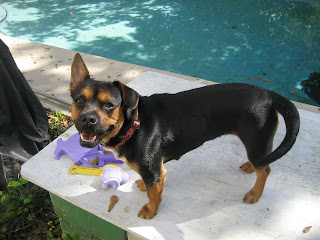 My sister who lives in a room above our garage has been on a quest for companionship and love. She's filled out on-line dating questionnaires and gone to dinner with a few guys who proved to be less than promising. Recently she raised (or lowered, depending on how you look at it!) her sights. She opted for a dog.
Before choosing the perfect pet she did lots of homework. She checked on the Internet and pet rescue societies for the best breed to suit her needs. She studied up on the best way to introduce a new dog to an old dog, 2 cats and the rest of the family members. She printed out information sheets on crate training and obedience training expecting each of us to be on the same page.
As it turned out finding the perfect dog was as easy as spending one hour at the local humane society. She quickly determined Laci, half Rottweiller and half dachshund, was the dog for her. In other words a short, squat solid mutt with a big smile and one floppy ear. Before Laci could actually be adopted, however, she had to pass a behavior test that had something to do with giving up a rawhide bone without growling or biting. My sister went back every day for a week to visit the dog, encouraging good dog behavior and promising a good home as the ultimate reward.
Last Saturday after purchasing a bed, a crate, several toys, a bowl for food and a bowl for water, a box of treats, a leash and collar, my sister was joined heart to heart with the little brown and black canine. 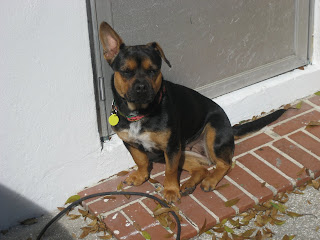 Three days later, Aunt Merry ME was left in charge of doggie day care. When I came out to fix my dad and the Alpha Dog' s breakfasts there was a note on the table indicating that Laci had been left un-crated (she whined) in the upstairs room and would probably need to be let out. In an effort to multi-task I put the egg water on to boil, dog food in the microwave to be warmed and Laci in the back yard. Then, as often happens, I got a little distracted. 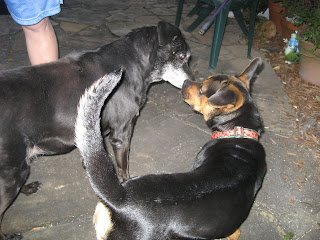 [Photo: The beginning of the nose to nose, butt to butt, do si do!]
I could hear Laci barking to come in, or at least not be left alone in the yard, but I had kitchen duties to attend to. I noticed when the barking stopped, but paid little attention. I just figured she'd found herself a good waiting place. I continued with breakfast preparation. When I finished I went to the door and called Laci.
Let me say at this point, the statement "the silence was deafening" could not have been truer. There was no sound of little dog feet running in excited anticipation. I couldn't hear the flapping of her tag against the collar. There wasn't a whimper or any sound that would suggest that Laci was anywhere in the yard. I know it's crazy, but for an instant I seriously thought oh, isn't that cute, the dog likes to play hide and seek. So I started seeking and soon discovered the slight space between the house and the fence - something big enough for a chihuahua to squeeze through, but nothing that a bigger dog could maneuver. Still, the pile of dirt she'd left behind as she deftly dug her way out of the yard was way more evidence than this missing dog detective needed. Sweet little lovable Laci was gone. Long gone. Dog gone.
What to do first? Grab the car keys and go looking for her? Or perfect the story I would tell my sister about how her newest and dearest BFF had been abducted by aliens? Not wasting any more time, I flagged down the neighbor who was out for his morning stroll and put him on dog alert. Then I took off in the car, yelling the dog's name and praying to a kind of saint cocktail I invented for just such an occasion - St. Anthony (finder of lost things), St. Francis (lover of furry 4-footed creatures) and St. Jude (in case all else fails). I drove two blocks away before thinking how utterly ridiculous I was being. It was clear the dog had headed for parts unknown, probably towards the south where she'd once lived. Visions of "The Incredible Journey" flashed through my brain. I know how far dogs can travel to find their lost owners. Laci hadn't been with us long enough to know her new home was home.
Crap!
Laci! Laci!
Please St. Francis, I won't say another mean thing about roaches or spiders.
Laci! Laci!
Damn!
I drove one more block before heading home. Out of the corner of my eye I spied 2 women, 1 man with a telephone in hand, and 1 black dog, laying on its back enjoying the tummy rub.
Thank you St. Anthony/Francis/Jude. Now I'm going to kill the little runaway!
Apparently as soon as Laci made her escape she entertained herself by checking out the yards in closest proximity. Then she decided to accompany a woman walking down the street. She wouldn't get close enough to be caught, she just went along, as if in Dog Heaven, investigating the new smells. As Karma would have it, Laci was finally captured by the woman whose run-away dog, Annie, was once cornered by my mother in the yard of the woman whose dog, Buster, I had rescued several times before. Clearly, what goes around comes around. Not to mention alls well that ends well.
For the rest of the day Laci has been getting to know her way around inside as well as out. She's discovered the cat food, a long-forgotten rawhide bone, Beauty's dog bed and the comforts of the place I may start referring to as "The Ark." 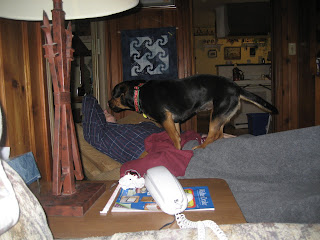 [Photo: Dad encouraging Laci to take a nap with him!] 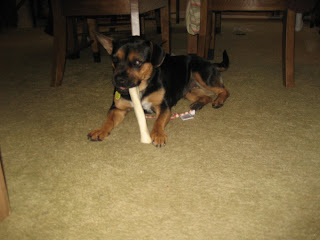 [Photo: Laci with the forgotten and verboten rawhide bone.]
Wishing for you someone who responds when you say "stay,"
Merry ME
Epilogue: As I sat here typing, I heard the the beginnings of that dreaded dog sound. The one where you know you only have about 10 seconds to jump up, corral the dog and get her outside before she blows. We made it to the door. Obviously the cat food did not agree with the dog's delicate sensibilities. Our stoop has now been christened with a big glob of olive green stomach contents. I guess that means she'll stay for awhile!
Posted by Merry ME at 4:32 PM

just wait until she finds the litter box - sadly speaking from experience; and

love the photo of her with your dad ;)

oh
oh my!
~laughing~
oh the rescue stories I could tell...
You have my heart felt sympathies!

A new pal in the house, that's good. But I got stuck in the story with wondering how THAT cross happened ...did the dachs get a step ladder? ( don't answer I don't really want to know!)
xx

Oh Merry ME...what a visual! I'm in stitches over here!