Is Being Versatile the Same as Tiptoeing Through the Tulips

Last night I received a rather criptic email from my friend Amy. The subject was "Head Up." I gleefully opened the message sure I was going to see "THE END" typed in big bold letters. Amy is nearing the end of the editing process for her memoir manuscript. You know how on a relay team, as one person runs her lap, the next person looks like one of those little golden runners on top of the trophy the team is hoping to win, frozen in the running position head down, one arm out front, one arm reaching back to grab the baton, legs poised to zoom ahead? Well that's how I feel about Amy finishing her edits. I am one of the team who will give it a final once-over before handing it off to an agent. All that to explain why I was excited by the email. 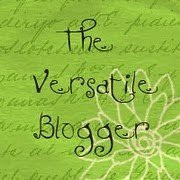 This is what I got instead: brace yourself. you'll want to make sure you read my blog tomorrow morning.  Having no idea what that was all about I turned on the computer this morning while I still half asleep. I opened her blog and found this. I've been tagged with the Versatile Blogger Award. As  Sarah Cotchaleovitch, author of Full Time Mom blog and the one who tagged Amy said, The Versatile Blogger Award is for bloggers with ADD! In essence it was an award made with the randomness of my thoughts in mind. Except for the last 41 days when I've been trying to stay on target with things I've noticed, my blog posts run the gamut of subjects and emotions that I experience on any given day. Thanks Amy. I know your computer time is limited and you didn't have a lot of time to think about your choice! It's good to know I'm one of the first that comes to mind.

As most other blog awards this one comes with some rules.  Rules that both Amy and Sarah broke so I won't feel too bad doing the same.  I do read a lot of blogs, each one of them more deserving of an award than mine. Except, they don't have the willy-nilly versatile quality the originators of the award intended. Pam, Terri, Dani, Illuminary, Wholly Jeane, Akasa Wolfsong, Patty and Molly all keep a pretty tight rein on their thoughts and ideas. Each uses their blog as a platform for adding beauty, light, creativity or personal wisdom to the world around them.  Marilyn, from my writing group writes an interesting self-help blog, and Carol's caregiving blog is recognized as one of the best.  Even though I run the risk of something really bad happening by breaking the chain,  I've decided to pass the Versatile Blogger baton to one other blogger. Another of my writing group pals, Laura Havice, for two reasons. Anyone who writes about the marriage breakup of tortoises, is my kind of blogger.

The second reason, has to do with the second part of the award - to divulge seven interesting tidbits about myself that readers may not know already.  I have no doubt that Laura's seven things will be way more interesting than mine.

1. I once convinced my daughter to drive with me from San Diego to Tucson to see a host of hot air balloons take off en masse.  It turned out the winds were uncooperative. As we lay on the hood of the car, bundled up against the early morning temperatures, we were covered in blowing sand.

2. While I don't remember the details, I think there was an incident on the aforementioned trip. Something about stopping to tinkle along the darkened and isolated highway. I believe there was a cop involved.

4. As if that wasn't enough to scar my inner ballerina for a lifetime, it took me 10 more years to realize I am a bit of a clutz. Painful as it was to learn my body was never meant to jete or pirouette, it was probably best that I learned this at an early age.

5. For some reason I have never understood, my sixth grade teacher, Mary Carden, believed me to be the reincarnation of Ethel Barrymore. Whenever an opportunity arose she had me memorize something and perform it in front of an audience. During the Christmas party, I stood before the whole class to recite The Night Before Christmas. I got through the beginning okay. But at that part where the tempo slows a bit, I froze. I couldn't remember my own name. And then, someone threw up. Seriously tossed everyone Christmas cookie he'd just eaten. I've never been so grateful for vomit in my life. I was especially grateful the vomit was not mine and sixth graders are not especially good at sitting through a poetry recital, thus no one paid me much attention.

6. I once won a blue ribbon at the St. Mary's County Fair, for needlepoint.

7.  The Ghost and Mr. Chicken is my most watched movie. Followed closely by On Golden Pond. Not sure if there is a connection there or not.

What's something interesting you'd like to share about yourself?
Wishing for you a day of versatility and whimsy,
Merry ME

i love it when you get awards! it always makes me smile! you so deserve them! and! i have never even HEARD of the ghost and mister chicken! gotta definitely look that up! :)

I think I can add some more good tidbits...there are lots. What about the coveted Betty Crocker Award that you won in high school. I think you even received a trophy.

And what about the impromtu 4 hour drive to Cambria, CA to seek out (if we could find him) our mother's once upon a time fiancé when she was only 18 years old and whom she traveled to Germany to marry but got cold feet in the end. It was a delightful visit, learning the story of a long ago romance that made us feel like quite accomplished super sleuths.

And what about, and what about...You truly deserve an award for your blogging and clever story telling. ld