Day 58 - My Own NatGeo Channel


Driving home today I noticed three woman walkers. Only they weren't walking. They were staring at something in a neighbor's yard. I thought at first it might have to do with the elderly lady who lives there. As I rounded the corner, I it was an egret. Now we live close to the river, but I've never seen these birds strolling the neighborhood before.  Seeing as this is a Year of Noticing, I drove around the block to get a picture. Mr. Egret was putting on quite a show. He'd discovered a snake in the grass and going about the business of capturing and eating it. No wonder the ladies were standing there. It was like the National Geographic Channel without a TV.

These birds have long necks and long bills. He used his bill to grab the snake, kind of like grabbing a sushi roll. He had to try a few times as the snake managed to escape. Once captured for good, the bird just stood there with the snake hanging out of his mouth. He might have been biting it, but I don't know if birds have teeth. Maybe he was just squeezing it. Or you know how sometimes you want to take a handful of pills in one gulp and you kind of have to get your mind around it so you don't gag on them? Maybe he was thinking, now what do I do? Then, biff bam boom, the sucker flipped that snake right down its gullet. I wasn't close enough to get a good picture, but could see that snake - still alive - trying really hard to slither his way back up and out. The bird was having none of it. He just kept swallowing. The lump in his throat moving slowly downward. All of a sudden he stands on his toes, flaps his wings and stretches his neck like a slinky. That snake didn't have anywhere else to go but down.

The bird stood there for a second or two, as if waiting for applause. Then took off like Santa's sleigh leaving a rooftop. It really was amazing.


Well I come home and tell Johnson about it. And he says well come look at this. I follow him around to the back of the house to the milkweed bush. I'd seen the yellow and black caterpillars [see picture #1], but lo and behold, Johnson spotted a chrysalis [see picture #2]. Or maybe it's a pupa. Not sure what either is or what's the difference. John was pretty sure he'd seen a butterfly laying eggs a while back. I didn't even know that butterflies laid eggs.  We weren't sure which came first the pupa or the caterpillar. I googled it and sure enough the caterpillars had eaten their fill of milkweed, apparently a highly prized treat which is self propagating so we have little bushes all over the yard. Once he got his fill he somehow spun his own little butterfly sleeping bag. 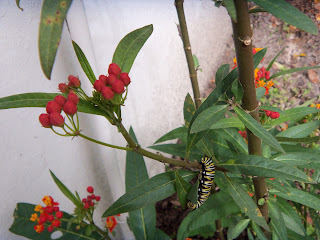 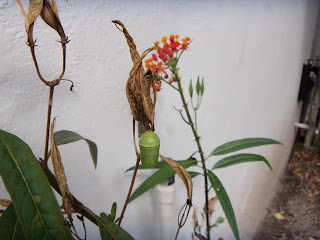 Mother Nature is pretty amazing don't you think? Can't wait for the butterflies.
Merry ME

P.S. In that whole story about the bird, I referred to it as a the. Actually I have no way of knowing whether it was a he or a she. Just picked one and stayed with it.

This is so serendipitous! :) I mean wow! ha ha ha Now you've got to become the citizen scientist and keep track of when you first noticed your little gift from heaven, and then watch for the changes to occur for its birth...
Grandmother Mary Ellen Ryall is a font of information in this as she has established one monarch habitat in Shell Lake Wisconsin and is now establishing in Fitchburg, Massachusetts. I do hope you get a chance to listen to her radio show...it's so interesting! Since I've met her I keep track of the Monarchs that travel through here, and there numbers are going down due to pesticide use as well as other pollinators like the bumble bee, honey bee and hummingbird...I've tried to make the yard here as friendly as I can to them.

The Egret picture is just awesome Mary...funny how nature works...in that he can swallow the whole darned snake and then take off in flight...you'd think it'd weigh it down? So fascinating...and what a great photo! :)

Go, Egret! I love the photos you took!

Milkweed is the food that attracts Monarch so I can't wait to see if you get a Monarch hatches from the cocoon.

AkasaWolfsong, have you read the Butterfly's Daughter?
It weaves a human story all through the story of the traveling Monarchs. Miss Merry, watch everyday for the butterfly because I think it doesn't take too many days. ld

I have read the Butterfly's Daughter and what an incredible book! It is forever imbedded upon my heart.

This delicate but oh so strong creature is a metaphor for life...