At Panera's this morning, I noticed how simply delightful it is to sit across the table from my sister and chat like there we have all the time in the world and no agenda.  LInda and I live on opposite sides of the country. It's been 2 years since she's been here.  I've missed her like crazy.

I brought along a box of memories, neither of us had ever seen. My father's old girlfriend (see http://mellington.blogspot.com/2009/06/cynthia-eugenia-franklindobsonhenry.html) has been moved to nursing care so her sons had to empty out her apartment. When she visited here in 2009 she showed me a locket that Dad had given her on her 16th birthday. She told me she wanted me to have it. Genie's step-daughter, Susan, sent me the locket along with some other memorabilia. I waited to open the box until Linda was here.  Inside there was a second locket with my father's picture in it, a Naval Academy fraternity pin studded with tiny pearls, and a picture. It was taken in 1937. There in front of us, was part of my father we'd never seen before. A young man with a full head of dark hair. A tiny young girl, wearing shorts and a big smile. They were so young, full of potential, with long lives still in front of them.  Through all those years - two husbands, two children, and a career - the Genie kept her memories of first love.  Opening the box was like opening a time capsule. It was a special moment. One I'm glad I could share with my beloved sister. 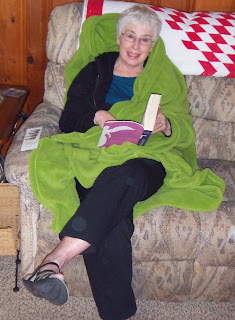 .
I  noticed that I apparently keep my house a little on the cold side. Poor thing comes to Florida from Washington state and has to stay wrapped in a blanket to stay warm.

I noticed how Sweetie sort of melts into the background when there's more than two Reynolds girls in the room. But he doesn't whine or sulk like he's being neglected.  He knows how important sister time is to me. I'm reminded how well he understands me. I am grateful.

The time we spend together is never long enough. The next three days are going to fly by.  A good case could be made for selling this house and heading west.  But I won't think about that this week. I'll just enjoy having my big sister around again.

What have you noticed lately?
Merry Me

That you sound happy today:)

((HUGS)) and so glad your sister and you are having a good time together. The Genie memories are heart-warming.

So glad you and your sister opened the "L.S." box together. These items have been shared by your dad, saved by Genie and are home again. I reread your blog post describing their reunion which was a very special memory for me as well. Susan