"The past is a lesson.
To let go of it and learn from it is a process."
David Krueger


Sweetie has just finished a new course in coaching. It's all about changing your old life story so you can live a new one. We all have a story, lots of them. We have life stories, relationship stories, money stories. The stories have developed over our lifetimes. They are what we believe about ourselves. When we try to change there is a greater risk of failure than success unless we change the fundamental story.

I was giving my senior friend a pep talk the other night. I used this example:


When I was growing up, I prided myself on doing well in school. I could bring home a report card full of A's and my mother invariably said my sister was the smartest of her girls, she just didn't apply herself. Mom didn't say anything about me not being smart. It's what she didn't say that I heard. I have always felt (still do on some level) that I'm not smart.


Trying to debunk my "I'm not smart" story, a psychologist once gave me an IQ test. I scored high enough to put me in the "not as stupid as I think" category.  His point was/is I am smart enough to do just about anything I want to do (with the possible exception of becoming a rocket scientist). But because of my old story, I still have trouble believing that.  So, if I Sweetie were my New Life Coach, he might start with getting me to rewrite that story. The transition between old and new story is where the work is done.

In discussing a class with me, Sweetie said something that really hit home. He spoke about the need to "internalize" a loss before one can move beyond (transition) it. The grief needs to become a internal part of you. As this happens you become proactive instead of reactive.  I'm sure you can tell that this is my own interpretation of the conversation and if you want to know more you should go to the source, not try to follow my circuitous route to understanding. 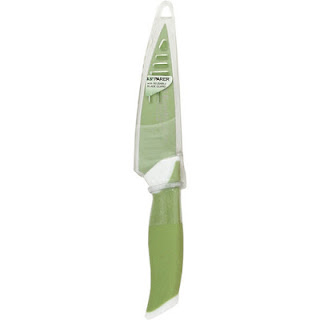 Here's why I'm telling you all this.  As I was cutting up some meat for Stroganoff with my Kendo paring knife, I began to think of my father.  He had a thing for sharp knives. He hated that I had so little regard for proper knife etiquette.  I leave them in the sink or put them in the dishwasher. If they get dull, I ask someone to sharpen them. As my new knife sliced through the meat with ease, I  had a glimmer of understanding of what Dad got so hyped up about. It made me want to take treat this lime green beauty with extra care. (See how the old story might be starting to change?)

I've been making Stroganoff for years. Pureed in the blender it was the first "real" food I fed my daughter.  I always cut thin strips of meat across the grain. I don't know why or if that is even right, but it's the way I do it. Well Dad liked his meat cut in chunks. So right out of the gate he had a "beef" with my way of doing things.  Every single time I made it, he told me the meat was too tough and it needed to be sprinkled with Adolf's tenderizer. And every single time I felt like pouring the whole tough meat and sour cream concoction on his head. Time and time again it pissed me off.

Well last night a light bulb went off  in my not smart enough brain.  I noticed that even though Dad's voice still yakked at me about how to cut the meat, it didn't make me crazy. It didn't make me mad. And it didn't make me sit down on the floor and cry for missing the old coot so much.  Aha, I told myself. This must be what Sweetie was talking about. This must be what he meant by "internalizing" the grief. By making it a part of me, not something I react against,  Dad's death doesn't have the same punch in the gut feeling it had just a few months ago. I think of him. I miss him. I get sad. But I haven't "reacted" in awhile.

All that to say, I am noticing a shift in my thinking. Perhaps I'm writing a new story. My own story with a lot less input from others.  It makes me want to answer some of the questions Sweetie asked me.

Dear Merry,
For me, it got to the point of being willing NOT to be committed to being broken anymore.

I had gotten so used to being in pain that it was almost a habit to obsess about how unhappy I was, and what was missing from my life.

I started asking what lessons i must have been meant to learn from things, i.e. my parents' cruelties.

Like maybe I was meant to learn self-esteem, and self-respect and self-confidence, and having such a harsh family was the only way I would understand the need for/fight for those wonderful gifts and gradually own them bit by bit.

So I surrendered the pain of feeling like a victim because i chose to claw my way out of the way I saw things.
I changed my belief systems, and their emphasis changed accordingly.

It gives the power to the GOOD things, and lessens the power of the things that makes you weep.

Like your family - maybe all their put-downs was a lesson for you to learn to NOT put yourself down, to choose your own path/decisions and feel good about it and you.

Not that they were doing this consciously -- but that YOU now are.
You have changed the karma when you do that:)