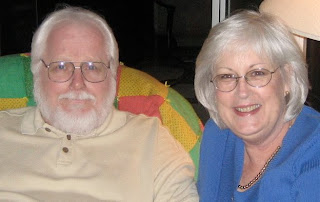 "Time is too slow for those who wait,
too swift for those who fear,
too long for those who grieve,
too short for those who rejoice,
but for those who love, time is eternity."
Henry Van Dyke
Here we are on the eve of another Valentine's Day. A day for lovers everywhere to scramble to embody the Hallmark concept of love. Chocolate manufacturers and florist shops do a booming business. Men who might not otherwise step foot in a card shop stand next to each other silently reading sappy poetry trying to figure out what it is that their girlfriend/wife/SO/Domestic Partner sees in the glittery cards. Then, to add insult to injury they have to stand in a line with other uncomfortable looking guys, shuffling from one foot to the other trying to act macho while holding an oversized stuffed animal, that really has nothing to do with love but blasts out Celine Dion's theme from Titanic when you press it's foot, under one arm and a heart-shaped box of cherry-filled dark chocolates in the other. It's quite obvious to the women in the same lines who still have a few tears running down their cheeks after choosing the card with just the perfect sentiment, that these fellows, who would have no problem standing in line at Home Depot sharing with each other the thrill of power tools, have visions of BudLight and football games dancing in their heads. Still they need to be given credit for making the effort.
We all know that for a relationship to be built on really solid ground, partners need to use the "L" word a lot more often then one day a year. Still we get caught up in the commercialization of it all. Even before the left over Christmas wrapping paper and twinkling lights are put away, the store aisles are full of Valentines giving lovers everywhere ample opportunity to purchase said greetings. I try to hold out, giving myself time to savor the meaning of the holiday, but really I'm as guilty as the next. I literally buy into the Hallmark hype.
For someone who could be on the American Greeting Card Buyers Hall of Fame, I'm a sucker for homemade cards made from folded over construction paper, covered in glue and paper doilies. Ironically I still harbor a deep seated fear of having an empty Valentine mailbox on my grade school desk. No matter that it's been 50 years since those scary, love-starved days. That's not to say I didn't get valentines - everyone did - but I was nonetheless afraid I wouldn't. At the same time I was unsure how to accept the greetings I did receive. Weird I know.
Over the years I've both anticipated and dreaded Valentine's Day. I've composed love letters that would rival sonnets exchanged by Romeo and Juliet. I've also cursed the very idea of love. I've decorated cookies with candy hearts and cried myself to sleep with a sugar hangover after eating a whole bag of Hershey Kisses that I bought myself. I've danced with a special someone to a special love song (anyone remember "The Shadow of Your Smile"?) but also been known to pretend that John Denver wrote one of his greatest songs for me instead of his beloved Annie. What girl hasn't?
Love is like a two-sided coin. In order to feel the flame, one has to risk being burned and light the match.
At a recent dinner, my father opined that young people don't know what love is; that love can't really exist until couple has been together for 60+ years. Each of the daughters sitting at the table who have struggled with love over the years, bristled a little. Coming from a man who rarely expresses his love in words, it was hard to listen to. I do believe, however, that the initial fire of love that burns so hotly (physically and emotionally) in the beginning of a relationship will of necessity die down. The smoldering embers, however, may not be as intense yet they maintain the ability to sustain heat and passion.
I wasn't there on the day my parents got married, but I was privileged to watch them at the end stage of their marriage. There was a spark of the fire that was lit so many years before on a sunny Hawaiian afternoon. Conversely, perhaps the best example of love, companionship and heart-speak I've ever witnessed was between a couple that only had ten short years together. At the risk of disagreeing with my father, I am of the opinion that it is not a matter of years in the love but of the love in the years. Does that make sense?
Sweetie and I are nearing the 6th anniversary of our meeting. It was a fate-filled afternoon in pine cleaner-scented MacDonald's. While I sipped my Coke and listened to his life story, I saw myself reflected in his blue eyes. At the time neither of us was expecting to fall in love. We were two people who had been down that road before and didn't particularly trust life or love. As I recall we looking for fun and friendship, not wine and roses. Ha! I'm pretty sure if we'd known then what we know now about where we were headed we might have shook hands and wished other a happy life. Today, though, I have to say even with the complicated family dynamics, loving Sweetie and having him love me back is what Valentine's Day is all about.
There are lots of love songs that could speak to our relationship. As I've been writing this post I've been listening to an Alabama CD. One song made me think just how right it feels to love again. In general and in particular. Sweetie, this one is for you.
Wishing each of you love with a capital "L"
Merry ME
Posted by Merry ME at 4:37 PM

I love Alabama - of course, I'm from Alabama, too . Happy Valentines Day to you and your sweetie! And thanks for the plug earlier :)

That was very nice, Merry. Hope you and your Sweetie have a wonderful day tomorrow - and many love-filled years ahead.

It's hard to be happy for you when I am single - but I am glad someone has what I would like to have. Maybe it is contagious:)

Here is a link to some better cardinal photos...and this time, I caught his mate