"they know me in a way no one else ever has.
they open me to things i never knew existed.
they drive me to insanity and push me to my depths.
the are the beat of my heart,
the pulse in my veins, and the energy in my soul.
they are my kids."
terri st. cloud 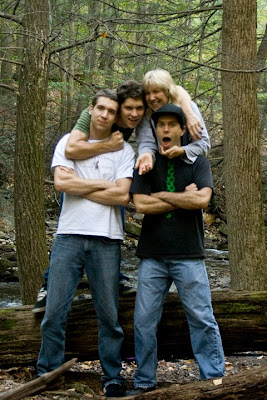 By a series of serendipitous events, Terri St. Cloud crossed my blog path a few years ago. Terri is kind of like a lightening rod. She attracts and invites people into her world on the premise that they are doing something to make her feel better. When really, what's happening is she is all about doing for others. Through bonesigh arts she shares her story of self-discovery, lighting the way for those who feel stuck in their own darkness. If you know Terri, you know what I mean. If you don't, then you just have to hop on over to her blog/site and rest in the branches of her white tree for awhile.
Terri has done a lot of inner child work. In fact to know Big Terri is to know Little Ter. Her work in this area encourages me to do the same. It is basically all about learning to re-parent one's wounded inner child. When I think of Terri, I can't help but think of her in terms of both the child and the parent. She easily slips between the two worlds. It's Terri, the parent I want to tell you about today.
"every time I looked up at Noah or Zakk,
I was so glad to be out there with them.
the smiles that passed between us, the laughter,
the just being a team.
it was absolutely being a family in the truest sense.
I knew it. and it felt great."
tsc
Terri has 3 sons, or apes as she affectionately refers to them. Josh, Noak and Zakk. It's perfectly understandable for a mom to be proud of and want to shout out to the world about her kids. Terri's no different in that respect, only she seldom takes any of the credit herself. I haven't met her sons so I can't speak from personal knowledge. But I gotta think a lot of who they are as adults has to do with the way they were raised by Terri.
First of all she home-schooled them. In my book, that takes a special kind of person. I'm guessing her natural curiosity was as much a teaching aid as any manual she might have used. Then there is her willingness to be open and forthright about her emotions, her creativity, her business, her view of the world, and anything else she considers important. Her lead-by-example style must have been the fertile ground the apes needed to develop their own character. This is evident by the fact that even though Terri wanted them to follow the traditional, i.e. safe, go-to-college path, each of the boys opted to follow Terri's entreprenurial endeavors. Hard as that is, they saw her succeed which helped cast away their fears. I'm sure it helped to have a cheerleader mom like Ter on the sidelines.
So who are these men?
Well, Josh, the oldest, is a musician/entertainer. He's one of those guys who doesn't know a stranger. He is also a guitar teacher with students from 8 to 68. Terri calls him, "an old soul with a big heart." What is it they say about an apple not falling far from the tree?
Next there is Noah - the middle child - who is known as the "peacemaker". Noah is the "out front" man in business he shares with his brother Zakk. He is a photographer and designer of web-based company.
Zakk, is the techie behind the scenes. Got a computer problem, Zakk is one to call on.
Each of these guys is a businessman. But that doesn't tell you much about their heart. They work separately and together giving to their community whether it's raking a neighbor's yard, or sharing hope with someone they know whose having a hard time. Did I mention they like to take day trips, instead of expensive vacations, with their mom of all people. All 4 of them packed into one small car with the radio blaring Stevie Ray Vaughn. [Excuse me for sounding cynical, but I've been stuffed into a vehicle with 2 kids and a husband oblivious to the friction in the back seat, so day trips have never been my cup of tea. The fact that Terri and her boys do this on a regular basis is one of the reasons I know she's made of special stock.]
I love to read on Terri's blog that she and the apes are spending time together, because I like to vicarously share in their joy. Seriously, this family has the spirit of Norman Rockwell even if they sit around a table full of vegetables and tofu instead of some kind of roasted fowl. You don't have to be a Musketeer, to be all for one and one for all. You just have to pick up a snow shovel, slap on a mustache, or pull a welding shield down over your face and jump into the fray.
Today I'm grateful for families who share laughter, tears, love and time together.
Wishing for you time spent with people you love,
Merry ME
P.S. For a more up, close and personal feel of the boys here are their individual web sites. You have to admit, they are pretty talented.
Josh - http://joshurban.com/
Noah & Zakk - http://mazuzu.com/#!/Home
Noah - http://misternoah.com/

i feel so incredibly loved!
it's such neat timing too as i just had a day trip with josh yesterday and i'm still floating on air from all the fun we had....and then i read this....and i feel so darn loved. mar, you truly truly honor me. and the apes!!! thank you so much for this.....i'm gonna print it out and keep it forever!

Mary...I loved this honoring of Terri...my Star Woman I call her.
She is one phenominal woman and I'm so blessed to know her, and yes, she has made my life and that of my Grandson's much lighter and brighter since meeting her. Her 'light' truly is far shining, as are her Apes! :)

Thank You Mary for your 'light' too, as your light brightens my path in so many ways! I'm blessed to know you indeed, and your support over the past several years holds a special place in my heart. (As does Terri's)