"Photography is a way of feeling, of touching, of loving.
What you have caught on film is captured forever ...
it remembers little things, long after you have forgotten everything."
Aaron Siskind 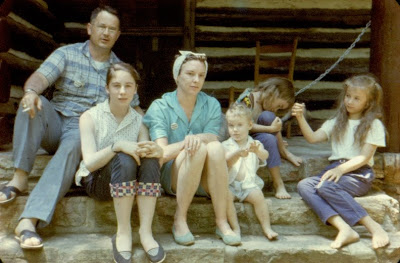 [Take # 34: One more time... everyone look at the camera and say cheese!]
Around the time I was three years old my father took up the hobby of photography. He had fancy cameras, a darkroom, boxes of neatly filed slides and a fire to take pictures. This is where our family tradition of posing on the chow bench (a small Asian table my parent's acquired in Guam, I think) all decked out in birthday or Christmas attire was born. Like getting your picture taken at school you primped until you thought you looked your very best, then had to wait for the person in front of you to finish her turn. With five of daughters, my mom and sometimes a self-timed family shot which included the dog, the photo sessions could take a long time and waiting wasn't always the forte of little girls in scratchy crinolines. Which you could tell because there was always a photo of someone with a frown or red eyes from crying. Much as we may have disliked it, each of my sisters is glad to have the old photos. The slides Dad made and collected sit in boxes on his closet shelf curling from age and climate. Not sure what I'm going to do with them.
The photography bug must have been passed along via DNA to the follow-on generations. The girls who didn't like the picture process have been shouting "say cheese" or "whiskey" at their children and children's children. And yes, I was even saying it to 6 week old Gracie who only smiles when there is a little gas on her tummy.While it does nothing to organize the pictures I have stashed in boxes in every room of the house, the invention of computers with storing capabilities, and sites like Shutterfly where you can keep them in a place you won't lose them have made the taking and saving of pictures a lot easier. No more trips to Walgreens with film to develop. Everything is digital.
My photography skills are minimal. However, as my ex-husband used to say, even a blind elephant will find a peanut now and then. On occasion I take a picture I really like. Not a masterpiece, but something pretty.
There are several blogs I like to go to that are nothing but photographs. The pictures are the only words needed. 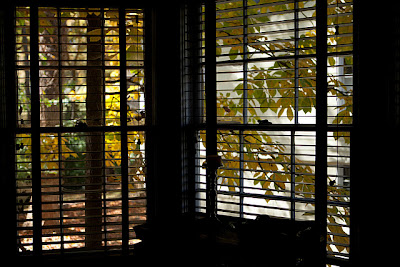 molly-blogs.blogspot.com
First there is Molly who is always studying and perfecting her craft. I love the way she catches the light in places I'd never know it exists. Molly has an architectural bent to her work, as well as the ability to catch her Golden Retrievers, Gus and Cotton, looking their doggy best. 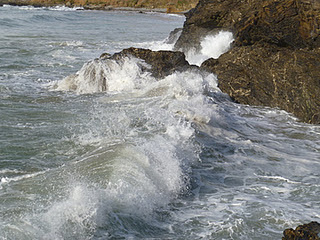 byrdonfire.blogspot.com/
Another great photo blog belongs to Mandy, aka Firebyrd, who lives in England. Oh my goodness, can this lady take some photos. Most of what I know about England is what I've read or seen in movies. If I ever get in the mood to travel outside of my little corner of the world all I have to do is go to Mandy's blog. There are landscapes, seascapes, all kinds of flowers and things she sees on her ten mile walks. Some day if I ever do travel I'd like to take a walk through Mandy's garden.
The thing about photographs is they help me remember. Since my son has been living with us he tells all kinds of tales about places we lived and adventures he had when he was small. Personally I think he makes most of it up. But I can pull out old photo albums and see the places he remembers not quite like it was yesterday but at least that it happened. Pictures I took last year at this time are some of the last I have of my father and I. Our roles had almost totally reversed, even the photography ones. I was the one asking him to look at the camera and asking him to smile.
Indeed a picture is worth 1000 words. I'm grateful to have them, and I'm grateful to the blogosphere where so many talented people willingly share their talents.
Wishing for you a picture perfect day.
Merry ME
P.S. Mandy also moderates another blog called Beautiful World where photographers from all over the world post theirs pictures. Beware: it's the kind of place where you lose all sense of time when you start scrolling through the pictures.
P.S.S. The pictures above belong to their makers so I hope they don't mind that I copied them here.
Posted by Merry ME at 3:33 PM

Happy for you to use any of my pics.
Getting a digital camera back in 2008 was a good thing I've not looked back since.
Love the family pic at the start of this post.

Lovely picture! Interesting that the only one who looks happy is the photographer! Where are the chow bench beauty shots? Thanks for the good laugh. ld

Mary...you can transfer all of those photos your Dad took onto Disk by taking them to Walgreen's. It doesn't cost much I think.

I loved looking at the photos you've shared today. The one of your Mom and Dad and you kids is just soooo adorable! :)