"Clogged with yesterday's excess,
the body drags the mind down with it."
Horace
I'd just about given up finding a quote for today's post, then I came across the one above by Horace. Not sure who Horace is, but he's hit the nail directly on my head. Yesterday Sweetie and I went to the Fair. Before leaving, however, he let me know he does NOT do rides - not even a Ferris wheel, my fave. The thing about fairs is there is so much more to do than ride scary, moving-so-fast-you want-to-hurl-or-scream and usually at the same time. There are 4-H farm animals to see. Side shows like the 2-headed calf and bearded lady. Prize winning arts and crafts displays of quilts, knitting, woodworking, and photography. Country music bands and people selling just about anything you can imagine.
Oops, I forgot to mention artery-clogging, heart-stopping, sugar-laden, grease-covered food. Next to rides this, in my opinion, is the best part of the fair. Even if you don't eat anything, just walking in the gates and getting the aroma of sausages cooked with onions and peppers makes the trip worthwhile. Okay, no, that was an exaggeration by an adjective proned writer. In the olden days that might have been true. I discovered yesterday that going to the fair is no longer an inexpensive way to spend the day. I would have had to take out a loan if I had small kids with me. Since Sweetie and I went with eating on our minds, we stopped at the first food stand we saw. They had everything from the sausage concoctions, to corn dogs, to Nachos, to French Fries, to Chicken on a Stick, to funnel cakes - all cooked, I believe in the same grease.
I know - gross. But I didn't think about that when I stood at the window ordering. The already cooked hamburgers looked a little nasty, but we weren't getting hamburgers - we wanted fair food. $37.oo later we had lunch and about 10 minutes after that we threw half of it away and headed for the 4H displays.
Good golly cows are big when you get real close to them, and roosters are rather loud inside a closed arena. Perhaps roosters are loud wherever they are. I have to say the chickens didn't really do anything for me. Instead of marveling at the Rhode Island Red, or the Chinese hens that looked like those troll dolls from the 60's, I kept seeing the "chicken on a stick" I'd just tried to eat. I have to say, though, there is just nothing cuter than a porky, pink piglet. 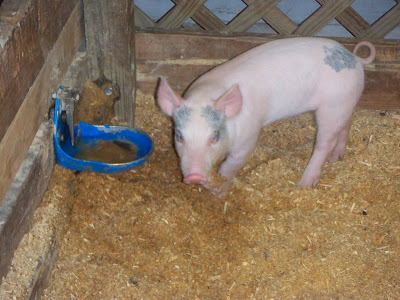 While I stood watching for a chick to peep out of an egg, Sweetie wandered down to check out the horses. By the time I stood next to him and said prayers of gratitude that there was a large fence between us, Sweetie was already conversing with the horse like they were old friends. It was quite fun to see. I kind of expected the horse to say something like Mr. Ed. Instead he just nodded his head in agreement to the brilliant things Sweetie was saying. One wise horse! 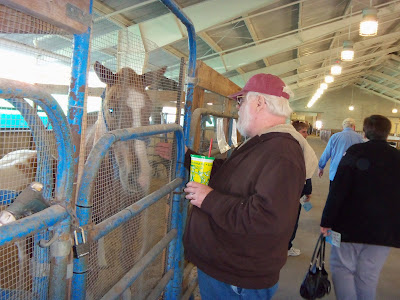 [Notice my law abiding Sweetie sticking his right hand inside the fence with total disregard for the nearby sign that says "do not stick your hand inside the fence."]
With farm animals checked off our list we headed for the arts & crafts barn. To say I was disappointed would be a bit of an understatement. There was one barn full of plants, which if you are into raising exotic plants would have pleased you. I was looking for the quilt displays, and cake decorating displays and art pieces by elementary school kids. There was ONE quilt with a blue ribbon. It may have been ribbon worthy but it was folded up so I couldn't even see it. What's up with that? Shouldn't quilts be opened up so women can ooh and ahh over the tiny stitches? There were a few honey and jam sellers. The hall was mostly taken up by old cars and a place to play Bingo. Sweetie and I moved on.
We walked and walked and walked but never even got near the rides. If there was a carnival lane for throwing ping pong balls into fish bowls or shooting at ducks on a motorized track for a big stuffed animal, we never saw it either. Much less the side show attractions. Turning right off one of the main drags we hit Fair Food alley, a veritable smorgasbord of junk food. Seriously, you can't even disguise the fact that deep fried Snickers bars are anything but bad for your health. At the end of this alley my sore foot couldn't take any more walking so we headed for the exit which put us right by the Vietnamese Pig Races just as the pigs were being herded into the slots for the first race. I swear it made the whole fair experience worthwhile. The only thing cuter than the aforementioned piglets is seeing them dive into a lap pool and head for the home stretch where an Oreo treat was waiting.
I probably shouldn't admit this after telling you I had already spent a king's ransom on fried food. The thing is I hadn't yet bought a funnel cake which was one of the main reasons I even brought the whole trip up. Staring gluttony in the face I bought one of sugar-encrusted confections. I was covered head to toe in white powder by the time I got home, and my stomach kind of squished from so much grease. I settled into the recliner with an icepack under my foot and fell into a sugar-induced coma. Thank goodness the fair only comes around once a year!
Today I'm grateful for Pepto Bismal.
Wishing you a day of sweet delights and moderation.
Merry ME
Posted by Merry ME at 2:31 PM

Sounds like hell to me... I've never recovered from the sandwich Sorrow bought me of deep fried white bread with cheese and ham dipped in sugar.
Give me good old British fish 'n' chips anyday. Oh and half of them get chucked away too!

Very funny Byrd!
I am going to have to get one this week, and just eat it up!
*laughing*
Merry we all have some crazy tatstes don't we?

How did you hurt your foot Mary? I have missed something here or you aren't tellin'!

I loved the telling of your story, ha ha...Sweetie trying to stroke the horse and you and the pigs, lol! Quite funny indeed.

As for Carnival Food I always have to have a Corn Dog with lots of mustard slathered on...sometimes cotton candy but one must always have an Elephant Ear! Just you speaking of all the grease-covered food makes my stomach somersault!

What a disappointment there were no quilts to speak of and the one that won not even on display! Booo Hissss!

AT least you got to see the Piggy Race!!!