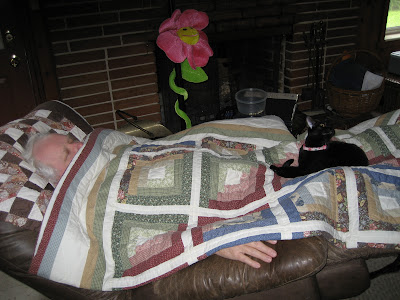 'Tis healthy to be sick sometimes."
Henry David Thoreau
My Sweetie has been sick for 3 days. The sniffling, sneezing, coughing, aching, fever, can't sleep or breathe kind of sick. I've considered calling the Vicks people to offer him up for a Nyquil ad. Seriously he looks like Santa has gone to bed and may not get up in time to deliver presents around the world. His eyes have lost their twinkle. His normaly perfectly coiffed white hair is all curled up on top of his head and matted in back where it meets the pillow. Girl Cat thinks his big round belly, piled high with quilts is the perfect place to take a nap, until Sweetie coughs and sends her flying into the air looking like one of those scared Halloween cats. The sunlight reflecting of his cherry red nose rivals that of Rudolph. Used tissues that missed the trash can, OTC apothecaries, and empty juice glasses are piled up next to his chair where he lies, contemplating his Last Will and Testament.
Whatever the bug is, it's going around. Typical for this time of year. The family holding hands for grace around a food laden table is a breeding ground for germs. That whole thing about sneeze or cough into your elbow flies out the window of your consciousness when you are stuck in a mile-long line at Walmart with Black Friday deals overflowing your cart. Serious shoppers can't even find an elbow so they cough and sneeze wherever.
I've had a similar bug twice this year already. I've had a flu shot and a pneumonia shot. I load myself up everyday with Vitamin C, and no one could say I don't get enough rest. Airborne is my new best friend. Because even though there is no one around for me to play Florence Nightengale over - no kids, no old person - I'm still of the mindset Mom's don't get sick. I will long remember what the house and kids looked like after I'd had the flu for a couple of days and my then-hubby was left in charge of things. I vowed never to get sick again. Let me just say this as nicely as I can, the man prided himself on being a Naval Aviator (which to all Naval Aviators is just a step below God). He could fly a helicopter into and out of a potato patch with nary a scratch to the bird or crew, but he had no skills whatsoever feeding and corraling small children. I know now it really doesn't hurt a kid to eat Fruit Loops for dinner, not to take a bath or to wear the same clothes for 3 days in a row, but at the time, I'm pretty sure I stuffed some tissues in my sleeve and took over before the board of health condemned our house.
All that to say I really don't want to get sick. I'm keeping my distance from Sweetie, which seems to be okay with him because he's a leave-me-alone kind of sick person. If it weren't for the aforementioned germs, his illness is the perfect excuse to join the masses looking for deals. Whatever happened to all those blue masks people wore to prevent the spread of Swine flu? Maybe I'll dig one out.
Today I'm grateful for good health. It's one of those things you don't really appreciate until you can't move out of the recliner without your whole body crying foul.
My wish for you this first day of the Holiday Season is good parking karma.
Merry ME
P.S. Can anyone tell my what that quote means? It's kind of deep, don't you think? Perhaps Thoreau had spent too many days alone in the woods.
P.S.S. The picture above is an old one. I am not so insensitive that I'd take a picture of a person on his death bed. Okay, maybe I am a little insensitive because I did consider it. But the man is finally breathing with some kind of regularity and I didn't dare disturb him.
Posted by Merry ME at 12:05 AM