"To me, the greatest pleasure of writing
is not what it's about,
but the inner music the words make."
Truman Capote 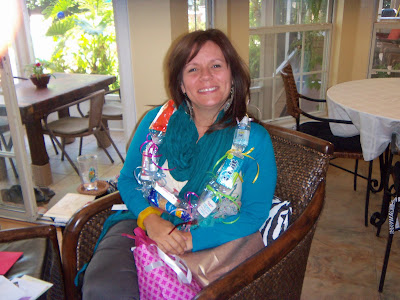 Carol O'Dell
Yesterday I felt poopy. As the day wore on, I felt even poopier. If asked I'd be hard pressed to tell you if I was angry or sad. Probably some of both. And, even though I explored the why's of the feelings, I couldn't figure it out. Instead, I just went to bed. I was asleep by 8:30.
Today was a different story. I felt energized and connected. It was writing group day. There's just something about being with these woman that makes me happy. That's not to say that I've always been happy when I'm with them. But that doesn't seem to matter. They let me be however I am. There's something so freeing about that. And validating ... which also happens to be my word for what I get out of writing. Even when I haven't written anything. Along with my blog buddies this group of talented writers is (goofy as it sounds) the wind beneath my wings.
The woman who started it all is Carol O'Dell. I've told the story before, but it bears repeating. How in the middle of a caregiving fog, I read her book Mothering Mother and felt an instant connection. Her mother and my father were both demanding of the daughters who cared for them night and day. Carol wrote about taking long walks by the river to clear her head. Even though we live miles apart the same river flows in my neighborhood. I fantasized about walking with Carol when Dad had driven me to the brink of tossing a coin as to whether or not to do damage to him or me. Even then, when she didn't know I existed, her words calmed me. When I finished the book I cried for the end of a one-sided relationship. As if by magic her email address was at the end of the book. I wrote her. She answered, and a real relationship began to take shape. Later that year, she invited me to the first meeting of a writing group she was starting. The rest, as they say, is history. In the four years the group has been together all of us have become good friends and even better writers because of Carol's mentoring.
"Critique groups give us the chance to bring our gifts to the table."
Recently I nominated Carol for a caregiving award. I thought she was a shoe in. In addition to the writing projects she is involved in, the speaking engagements, the classes she teaches, the painting and gardening she does, Carol continues to be a spokesperson for caregivers. She writes a weekly column at Caring.com, contributes articles that address current caregiving issues and is a featured media presenter for Caring.com. She also writes Mothering Mother and More, a caregiving blog with over 300 posts dedicated to issues, diseases and challenges that come with caring for those we love. Yesterday I got a letter from the nominating committee that informed she didn't win. What? Didn't win? Maybe that's why I felt poopy. Cause for sure, I can't think of anyone who could possibly deserve this award more.
On top of all that Carol is beautiful and smart. Her smile beckons you to come, sit, and stay awhile. Her soft southern drawl oozes emotion that can make you laugh or cry depending on the story she's telling. She cares about people - even people she doesn't know. She's a great mom and relishes being a grandmother. But perhaps her greatest asset is her great big generous heart that reaches out and makes you feel like you can move mountains (or speak in public) even if mountain moving (or public speaking) never entered your own mind.

Carol, being named on my blog isn't exactly the same as getting a prize from the Eldercare people. It also won't cost you 50 bucks for dinner. But I want you to know your friendship and mentoring is every bit as comforting as a soft green blanket.
Today I'm grateful for chance meetings and people who share from their heart.
Wishing for you a group of like-minded friends,
Merry ME
P.S. Carol also has a personal blog you can check out here.
Posted by Merry ME at 10:15 PM

Hi Mary,
Let's see, would I rather receive an award from a bunch of people who don't know me...or receive the award of your words, words that reflect our relationship, the years we've known each other, the writing we do together...?
Your gift is far more meaningful, and I really do mean that! To know that my words, my life touched one person--and now I have proof in you--that our lives are truly different from knowing each other--that's profound.
Do you have any idea how good, honest, present, generous and thoughtful you are??? You are. I wish all the love you give could seep into the marrow of your bones, into your knowing place so that you would never doubt.
I take the gift of the words you wrote--and I thank you for them.
~Carol O'Dell