A Tale of Two Kitties/My version

I just read anitjen's post for today. It was about one of her cat's aerial abilities and another of cat's hunting prowess. I also have two cats. Cat's who aren't supposed to be in high places. Cats who don't know that there is life beyond the back door.

So imagine my surprise when, as I was reading Jenni's post, the girl cat wanders in with a mouth full of feathers. She is acting like she just won a feline version of the lottery. She is tossing around feathers like they are actually attached to a body with wings. In reality she's found a bunch of feathers that I collected and banded together in a kind of feng shui feather bokay and stuck in a plant.

Said plant was in the sink being watered. I suspect said cat got up on the counter where she doesn't belong and took the feathers right out of the plant. I'm thinking this is against the house rules, but like Jenni, I feel kind of proud that her natural instincts weren't completely bred out of her or drowned when she was thrown in the well from which she was rescued.

I grabbed my camera to try to capture the feather hunt on film. It's really not easy to photograph black cats. The pictures always end up looking like black blobs. Sometimes the blobs have big red eyes. Nonetheless here is a sequence of photos from Girl Cat having fun entertaining herself, to her brother, Boy Cat, eventually stealing the feathers from her. The picture(s) I didn't get was of Miss Braveheart walking off looking uninterested, then a few minutes later strolling back in the room with the feathers hanging out of her mouth. Obviously she had won the battle. Girls rule! 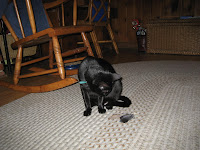 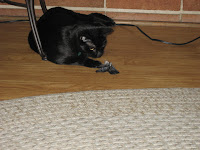 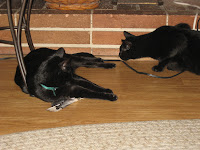 3. "La, la! I'm just checking out this wire. No I don't even notice the feathers you're sitting on." 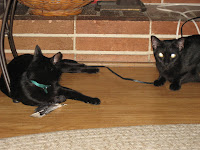 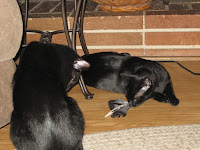 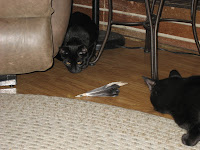 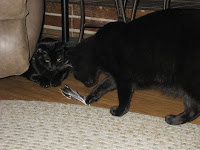 "Here, little lady, let a man show you how it's gone."

Who knew feathers could be so much fun?
Merry ME
Posted by Merry ME at 10:30 PM