"Let us rise up and be thankful,
for if we didn't learn a lot today, at least we learned a little,
and if we didn't learn a little, at least we didn't get sick,
and if we got sick, at least we didn't die;
so, let us all be thankful."
Buddah*
Today at our house it's going to be Thanksgiving. I know it's Sat. not Thursday and it's the beginning of the month, not the end, but it is the day when our family has gathered from coast to coast so we're going to be grateful (dammit!) and eat our way through the many blessings we can count, and some then some. [At last count there were three pies on the counter, two pumpkin rolls in the fridge and brownies on the way. That's six things on the gratitude list already and we haven't even gotten to the turkey who gave his life for us.]
Five girls together in the house last night felt, as expected, both weird and good. For one thing, even though we're sisters there is always a getting to know one another period after being separated for a long time. Each sister's family stories need to be repeated as often as a new person enters the room. By the time we went to bed, I think we had all the formalities out of the way and were well on the way to being sisters again. 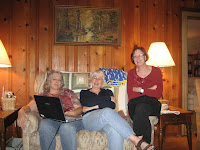 kind of strange for me. I couldn't help but notice we've all grown up! I mean, I know in my head we are all in our middle lives, more on the menopausal end of the spectrum. Yet, I've still got a mental image of us as young girls. The time and the children and the dysfunction, etc. is not even in the picture. So when I look at the photographs of us sitting around the same table of our youth and see gray haired mature ladies I ask myself, when did that happen? [Photo L: This is a love seat, not a full-length couch but I still think the days of all of us fitting on one couch are gone!] 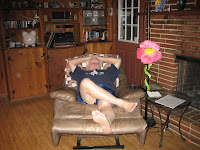 I have to add the conversations alone have changed to reflect our ages. Instead of talking of who we're dating, what's the latest fashion trend, and where we're going to "par-tay," we're weary eyed at 9pm, discussing chin hairs, dry skin and going to bed. Dad and Jack sat at either end of the female dominated table and were suspiciously quiet. Could it be that they were savoring the scene - one big happy family? Or that they simply were not up to the challenge of taking on five of us at once. Also, as predicted, mother's spirit hung about in the room. For some reason, I started a sentence and found myself saying "Mommy". I haven't said that in years. Jack said it was the only the beginning of all the regression that would be going on this weeken.! I wonder if we'll be sucking our thumbs and fighting over pacifiers by the time it's all over. [Photo L: Too much female energy for Jack who has retired to his chair to watch some manly TV show like football or wrestling!**]

In an effort to keep things on track (i.e. control the situation) I was up and down, flittering through the kitchen into the dining room, and back to the den. Like a butterfly, I had trouble settling in one place. I got a handle on the whole family picture taking thing [See previous post] by buying matching pjs and charging my camera's battery. Yet when it was determined that the turkey would have to be in the oven by 9am I timidly passed off the turkey preparation baton to Jean, the only sister who would be up at the crack of dawn. Because of her tendency for early rising she was picked to make the dressing and stuff it in the bird. Of course, I had celery and onions chopped up, directions explicitly written down waiting for her on the counter, but still, I let her do it.
When she woke me up to ask a couple of questions - to paper bag or not - I did get up to see how things were coming along - NOT to check on her! What I found in the kitchen was almost a scene out of "The Big Chill." I say almost because Jean was alone in the kitchen and the music blaring from the radio was not a 1980's soundtrack but David Crowder singing Christian rock songs. Jean was dancing, singing, worshiping and cooking all at the same time. It was a pure moment, and I'm sorry to say I ruined it by trying to surreptiously get it on film but when my camera didn't work right, I let out a less than worshipful "&%#!damn!"
In the tim 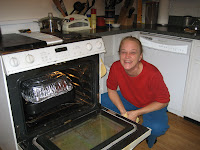 e Jean has lived here, I've discovered something I never knew about her. She has inherited a lot of Dad's engineering genes. She looks at a potential problem, thinks on it awhile then comes up with a very workable solution. It's fun to watch. It's even more fun to see how tickled she gets with her own creative solutions.
I hear the wheels of Dad's walker coming down the hall. Guess that means I need to take back the apron and wooden spoon. Breakfast orders will be coming fast and furious. Jean is getting her nails done. Things, for the moment, are back to normal.

The smell of turkey roasting and cinnamon rolls baking mixed with bathroom aromas of sweet smelling soap, hair spray and toothpaste - a few more things to add to the gratitude list. There are a few things missing, like the pitter patter of little feet, cheerios getting soggy in a bowlful of milk, waiting for Santa to appear on the Macy's Thanksgiving Day parade, potato peels clogging up the disposal. But, hey, the day is young and who knows what might happen yet!

My wish for you today, and every day, is that your eyes are open to see the blessings put before you, and that your heart is open to receive them,
Merry ME

* This Buddah quote cracks me up. Not sure why.
** I made that up about wrestling! Poetic license!
Posted by Merry ME at 9:25 AM