"Never worry about the size of your Christmas tree.
In the eyes of children, they are all 30 feet tall."
Larry Wilde, The Merry Book of Christmas 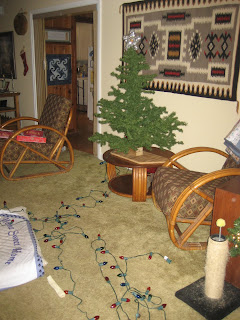 Ignoring for a minute the obvious starboard tilt to this tree, and the fact that the tree is not really a tree, but the top section of an artificial tree my parents that has perhaps seen one too many Christmases, does you see something amiss with this picture?
I'll give you a hint.
It is the three strings of lights that are on the floor no longer shining like they were when they were on the tree just 5 minutes before the picture was taken. I won't bore you with the picky little details like a new string of lights blowing, not one but 2 fuses, or the fact that the lights had been wound in and around the artificial branches not twice but three times.
It was about this time that I started to blow a fuse and called my very own SuperElf to the rescue. He's the one who discovered the burned out fuses. Excuse me, but when did Christmas lights start coming with fuses? And why, oh why, should 3 strands of cool burning (is that an oxymoron?) indoor lights need a fuse? Aren't they suppose to be cool? How can they get so hot they blow a fuse?

I know it's not good to cuss at inanimate objects any time of the year, but especially at Christmas. It just feels wrong to interrupt a chorus of angels singing and drummer boys drumming with a string of expletives that would send one not-so Merry ME right at the top of Santa's naughty list. I must say, however, that it feels really good to let the little blinking lights know exactly who is in charge.

I left the mess and the blue air surrounding the pathetic tree to make and eat dinner. Then I went back, tried once more, gave in, accepted imperfection and voila! It is done. It is kind of sad looking, does not smell of a pine forest - or any kind of forest for that matter - has a big bare spot and a list, but it is what it is and will suffice for this year.

As I put the final jingle ball on the lowest branch to test the willpower of two black kitties who want me to believe they could care less about lights and balls that glitter, my father walked through the room. I'd already added the Patty star to the tree (from my mom's 1st Christmas tree in 1921) not knowing it was tradition for him to do it. There was something about the tree that made him stop. He sat down on the table and stared at the tree. 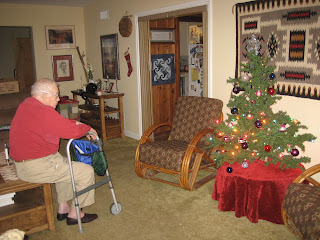 "That's a pretty tree," he said, with a tenderness I'd not heard in awhile. "It's getting to be the season if this old house could talk it could tell some good stories." I wonder what stories he was remembering?

I left to send an email, but Sweetie stayed in the room with Dad. I can't say they had a real conversation, but from where I sat (and listened) it was if an unspoken truce had been called. A kind of Christmas peace.

So what if the tree is as fake as Pamela Anderson's boobs, it worked a miracle in my house tonight. And isn't that what the holidays are all about.

Wishing you lights that work and peace-filled memories,
Merry ME
Posted by Merry ME at 11:02 PM

I'm thinking about going to a tree lot to ask for some of the trimmings - all i need is enough for an arrangement in a vase or a bucket...then there will be that wonderfully evocative fragrance, right?