"While we try to teach our children all about life,
our children teach us what life is all about."
Angela Schwindt 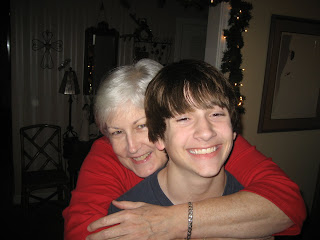 Yesterday was dreary, damp and chilly. If we lived above the Mason-Dixon line we'd have had several inches of snow. Instead, we enjoyed the rainfall we've been needing - just not all at one time!
By noon, the house was clean and sparkling with candle light. All I had to do was wait. And wait. And wait some more. Then I heard it. The sound of a car in the driveway and footsteps on the sidewalk leading up to the front door. I peeked out the mail slot and instead of seeing the two little baby brown eyes that used to look back at me I saw the long, lanky, holey jean-clad legs of the man/child I'd been waiting for. I opened the door and there he was. Be still my heart!
He walked right in, gave me a big hug and there you have it. A perfect Christmas! How good it was to see his parents too. Smiling, laughing, reminiscing. What a way to spend a dreary afternoon. I can't say Robert was exactly talkative, but he wasn't totally quiet either. He seemed to know when to interrupt the adult conversation with a teenaged zinger. His comments were like exclamation points at the end of a sentence. 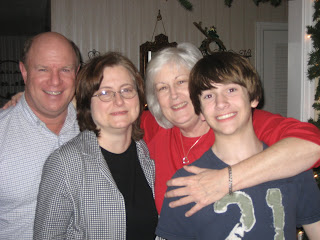 We exchanged information of all the people in our lives - who's been sick, who's had joint replacement, who's going where to school, etc. Of course, I grabbed my camera and tried to take some self-portraits. As usual, I'm a little off! 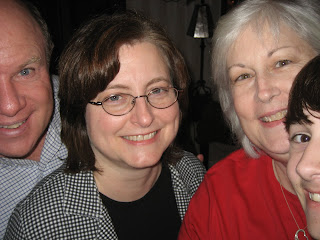 Then we took an actual trip down memory lane. We went to dinner at the Japanese Steak house where we used to go on a regular basis when I was Nanny and Robert was only 3 years old and more impressed with feeding the koi in the fish pond then men throwing knives in the air! I think the fish must have been the same ones from years past, but like Robert, they had increased in size!

In between memories of things we'd done together I garnered information like Robert doesn't really care much for school, but thinks he might want to be an engineer or produce video games when he grow up. No more ideas of joining the army. He's not much into sports, but is still a Tampa Bay Buccaneer's fan. His music likes lean towards Rock & Roll (so you like Elvis, I asked! It was a joke! He looked at me like I just stepped out of an alien space craft!) His favorite groups are, and I quote: Cage the Elephant, MudVain and The Gorillas. The Gorillas? I think he might have been pulling my leg, but I did not ask to listen to his playlist. How would this lover of John Denver react to Cage the Elephant?

I learned that one can sit in his own room, hook up to a laptop computer and play video games with someone in another state. Part of me is wildly impressed and the other thinks it is technology gone berserk.

Back at the house Sweetie rescued Robert from the nostalgia (God, I love that man. He always knows just the right moment to ride up on his white horse!). My two "boys" went in another room and talked about books. Before the night was over Robert had his nose in one of Sweetie's favorite books. I almost swooned with love for them both. 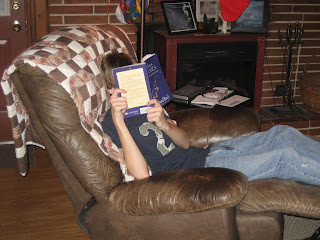 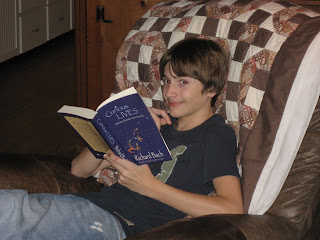 And then they were gone, into the cold rainy night. But not without promises of phone calls, pictures and emails. Maybe I'll see them this afternoon, but they've got other people to visit. I must be grateful for the time I had.

I've said it before, but I think it bears repeating. When I was a mom, I was pretty uptight. My husband was gone a lot and it seemed the whole responsibility of molding and shaping a child's future was in my hands. I worried a lot about what other people thought. I sometimes neglected to see the unique features of the children I loved so dearly. I did the best I could, but I struggled.

However, when I was Robert's nanny, I looked at the world through his eyes. I learned to listen for the sound of the garbage truck, and rain splashing in puddles. I learned to play castle, and "I'm a rock ...." Instead of stifling her in an adult's body I let my inner child grow as Robert grew. It was an incredibly special time in my life. And I'm pretty sure, even if he is way too cool to say so, it was special for him too. Excuse me while I toot my own horn, but I think this is what blessings are all about. When you give you get. And when you get you give.

Wishing for you a child, any child, with which to share the joy of life,

I thought of you all day and had tears in my eyes as I read and looked at pictures of you and 'little' Robert. He is so grown up and handsome. I know it was a magical day for him, too.
Loved the day's story. lg
PS What was the book?

what a great story! and what great smiles!!! loved this, mary! thanks for sharing....there's nothing like kids!

Lovely post, a joy to read.
And I'm so glad Robert came in and gave you that hug.
xx