"When it snows, you have two choices:
shovel or make snow angels"

This afternoon I entertained myself with a mini-craft project. I covered some wooden snowflakes about 6 inches in diameter with glitter. It probably would have been a lot more fun had I enlisted the aid of someone around 5 years old. Then there would be glue and colored glitter all over the table and rug as well as the snowflakes. Not having a child to play with I did the job very neatly and saved lots of glitter for the next project. I must say, as I look across the room at the snowflakes dancing to the rhythm of the overhead fan (don't tell Dad!), I am beginning to feel a little more Christmasy!

I live in Florida so other than on very rare occasions I do not see much snow. This has been a rainy weekend and the temperatures have dropped into the nearly frigid 60 something degree zone. In the sun it probably reached the 70 degree mark. A lot of people are shivering, wrapping their arms around their bodies and stamping their feet as if to keep their blood from freezing. Call me crazy or chalk it up to a lack of estrogen, I am actually enjoying the cold snap.


That said, however, I do not necessarily envy the people who live where the cold wind blows and snow drifts pile up along the roadside for months at a time. But at Christmas time it just seems like there should be a light covering of glistening snow covering everything in a kind of purifying ritual.

Sweetie and I occasionally like to live on the wild side by throwing open the bedroom window letting the cool air surround us. Then we throw an extra blanket and snuggle in. Sometimes I look over and all I can see of Sweetie is the very tip of his nose. But I know under those quilts is a great big smile. I think the man may have been an Eskimo in another life!

The front that brought cold-blooded Floridians to the point of pulling out their long underwear and Ugg boots, was most likely the same one that dropped a load of snow on Bedlam Farm. Last year I read Jon Katz's winter reports with a sense of disbelief and awe. It put a lot of my living on a farm fantasies in the proper perspective. But when I see pictures like this, all I can do is see the beauty of the moment. (Photo: Jon Katz, 12/6/09) 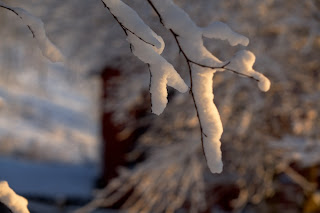 Seeing beauty in a snow drift instead of something that has to be shoveled could be as easy as talking nice to it! According to research by Dr. Masaru Emoto, human thoughts directed at water before it is frozen, will result in water crystals that will be either beautiful of ugly depending on the thought. I find this video pretty darn amazing. http://www.youtube.com/watch?v=lkbpXRSIUnE

Wishing for you happy thoughts and the winter landscape of your choice,

That is some amazing video.
60 degrees cold.... right!
xx