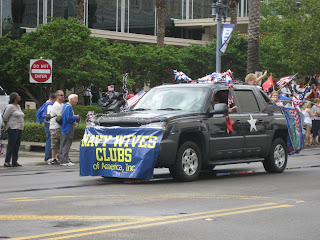 "As we express our gratitude,
we must never forget that
the highest appreciation is not to utter words,
but to live by them. "
John Fitzgerald Kennedy
Veteran's Day. A day to stop and remember those men and women who have given their time, their energy, their very lives for this country. For you and for me. Since the 1770's, on battlefields close to home and in lands far far away with names too hard to pronounce, they made the ultimate sacrifice in the name of freedom.
I have never been to a parade in Jacksonville, so I decided this would be the year that I would go downtown and see the southern salute to Veterans. I've been talking it up for a week, but the dark clouds and the idea of being too far from a bathroom helped convince my my menfolk to watch the festivities on the evening news. Undeterred, I headed to town without any idea what to expect. I kind of knew where to go, but wasn't sure which streets would be closed or where to park. I ended up parking in the $8 lot not knowing there was free parking 2 blocks away. As luck would have I ended up just a block away from the grandstand. And I was early enough to have my choice of tree planters to sit on!
Before the parade started it sprinkled some. Then the sun came out, as if to add its own nod of gratitude to the veterans being celebrated. It was a great parade. Lots of military units were represented, flags, floats, and even a few high school bands which was a surprise because I thought extra curricular classes like band had been cut due to lack of funds. There were representatives from the Boy Scouts, Girl Scouts and USO, as well as Veterans of Foreign Wars, Filipino Vets, Vietnamese Vets, motorcycle riding Vets, submariner vets, WWII & Korean vets, nursing vets and the group I could easily relate to, Navy Wives .... "it's not just a job, it's an adventure!"
It was a blissful two hours. Not exactly quiet (who knew big old base drums could vibrate the air right down to your toes?) but it felt good to be totally distracted and not think of what was happening at home. I enjoyed the sunshine on my face, the little kids playing in the puddles, the quiet but proud man standing next to me, the servicemen dressed in cammies holding babies in their arms.
It's easy to take the military for granted. Oh sure, we hear a nightly report on raging battles and casualties, but unless you are one of the family members counting the days til your soldier or sailor comes home you don't really think about it on a daily basis. At least I don't. But I've been on the other side of the fence. I've cried at both leave takings and home comings. Even surrounded by a cadre of families facing the same deployment it feels like you are all alone. As you wave goodbye, you take a deep breath that you don't releaese until you see that man (or woman) of yours walking back towards you.
Much has been said about the recent tragedy at Ft. Hood. There's no way to make sense out of something so senseless. For me, one face stands out more than the rest. It's that of Pvt. 1st Class Aaron T. Nemelka. He was all of 19 years old. When I look at the picture of a pimply faced kid, dressed in a uniform sitting in front of the flag he was eager to honor and defend, I have to ask, what is wrong with a world that thinks it is okay to send our babies into harm's way? It really doesn't matter if the babies are American, British, Japanese, Chinese, Israeli, Russian, Afghani, Iraqi, Somali, South African, Venezuelan, or Mongolian, when one dies all mothers in the world know what it feels like.
Tonight I am grateful for my grandfather, father, ex-husband, Sweetie, uncles, brother-in-law, nephew, niece, cousin, and many good friends who served honorably and by the grace of God came home in one piece. And I pray for the safety of those uniformed men and women who are sleeping tonight too far away from their loved ones.
Wishing for you and for me a world at peace,
Merry ME
P.S. I'm also grateful for the years of recovery from cancer my friend Mandy has under her belt.
Posted by Merry ME at 10:58 PM

Thank you, that was unexpected at the end.

Yesterday I was in town, which is a small country town. I happened to hear that the Church was where the Armistice was being honoured. We had our big Rememberance Services and Parades on Sunday gone.
I went along carrying all my shopping and about 50 of us alongside the RAF Cadets and the Mayor observed the silence from the Churchyard.

What was wonderful is below us on the road which is a busy junction all traffic halted, cars lorries bikes everyone. People were standing still on the sidewalk.
That I thought was impressive.

It's becoming more and more popular over here now to observe the 11th as well as Rememberance Sunday. For years no-one bothered. And now we want to.
xx

Dear MM...
I am still giggling from your comment on my blog. Thank you sooo much. Then, I came over, like I haven't for too long! to find that you are on the 11th day of Gratitude!!! And I am so filled up! Thank you 111 times, just for now.

And I am coming back this evening to read all of these... since I am delivering 3 large paintings in a couple of hours.