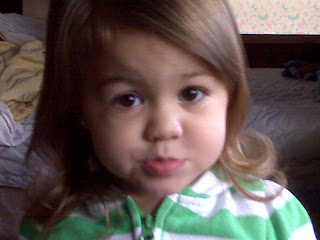 [Note: You've heard it before, but I think it bears repeating...]
"We'd all live in a quiet house
Without Big Bird or Mickey Mouse
And Kool Aid on the couch
Thank God for KIDS."
The Oakridge Boys 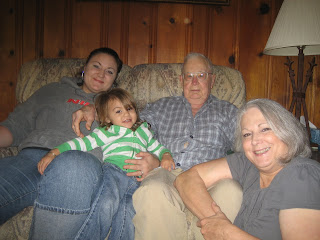 Today I am grateful for family visitors. It was good, I think, for my father to spend quality time with one of his girls he doesn't see too often. It was also good that #2 daughter brought her daughter and granddaughter with her. For visitors and visitees I believe it was a win/win situation. There is no doubt about it. A two-year old will add some spice to your life. It was enlightening, to say the least, to the person who has been seriously considering becoming a foster parent. I hate to admit it, but maybe my child rearing days are over. Even if my spirit is still willing, I'm not sure my body could keep up!

I'm also grateful to have my Boy Puss home. I stopped by the Vet to say hello and was invited to sit outside the penthouse suite of cat cages. The cat recognized my voice. He seemed happy to see me. He came over to sniff the finger I tentatively reached into the cage. No bad reaction, even though there was a dark blanket hanging on the door, giving the cat the illusion that he was safe in some cave!

The only time this cat has been much of a cuddler was when, I've now learned, his red blood cell level was increased and he basically felt like hell. Still, there he was on the inside, and I was on the outside. I opened the door, stuck my hand in and cooed to the pathetic looking cat. He inched towards me as if to get a little head rub, then fast as a cobra strike he sunk his teeth into my pinky finger. Yowzer! Who knew a sick cat could move that fast.

The Vet and her sidekick, Julie, aka the Cat Whisperer told me I could take this beast home. They tried to assure me that a cat's screech is just it's way of saying "get back" not "I'm going to claw your eyes out." I'm not sure I believed them, but I watched Julie manage the cat and retain all her fingers.

Once home, Scaredy Cat was much less stressed. He hasn't tried to bite me once. He's let me pet him without howling. He's taken a nap butt to butt with my Dad. His sister doesn't seem to glad to have him home. That might be because she was queen of the castle during his absence. Or it could be that he smells rather medicinal and veterinary-ish. The dog and cat have had the official smell-off. With the exception of a few shaved spots and a paw swollen to twice its normal size I believe this cat is doing okay. I haven't explained to him yet what he's got to look forward to. How do you tell a cat that having a needle stuck in his leg to have blood removed once a month is a good thing. I think I'll start by reminding him of the how good he felt after the Valium kicked in!

I'm sitting alone in the den as I write this post. The TV news is on, but muted. The room is quiet. I feel grateful for the peace of the moment. I think I'll soak it in for a few more minutes before I start rattling the pots and pans for dinner.

Three days into it, this gratitude thing is feeling pretty good. How about you? What are you grateful for today?